You are here: Home / Society / History

ACETIAM history, from teleimaging to telemedicine 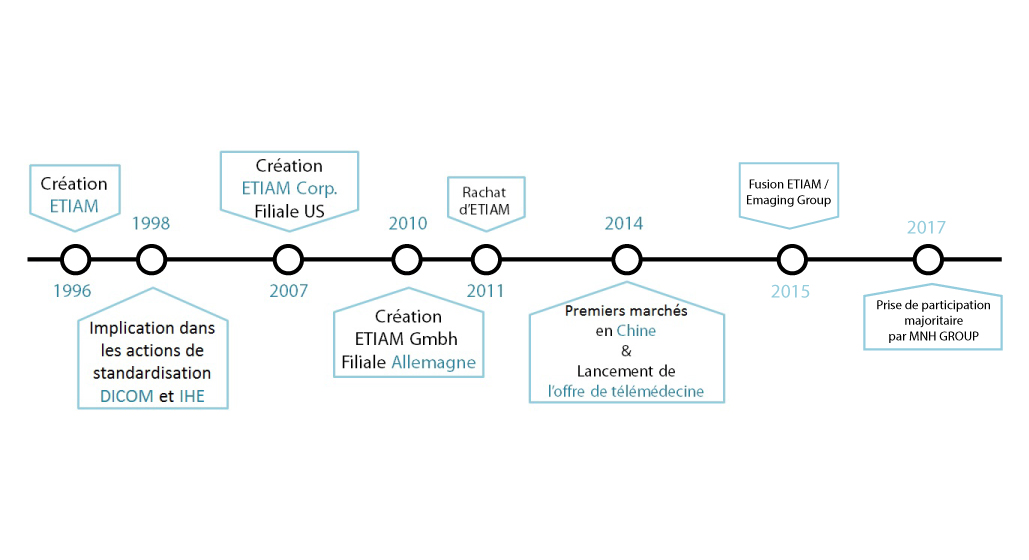 From 1983, Rennes General Healthcare Center has experienced one of the first PACS worldwide, even before the production of PCs and spread of IP communication.

ETIAM was founded hence the project CERIUM by this team of 5 engineers having each of them 5 to 15 years of experience in the devlopment of advanced imaging software and telemedicine application.

From 1998, ETIAM has accompanied its R&D efforts in products development by a strong involvement in standardisation actions, in France, in Europe and internationally, in particular around DICOM and IHE.

After a first step dedicated to R&D financed partially by venture capital, ETIAM insure its international development intensely (around 20% per year). From 2008 financial crisis, ETIAM has maintained its activity and consolidated its capital allowing its ambitious development from 2011 to 2013.

In 2017, ETIAM joined nehs, a major player for better patients outcomes. The same year, ETIAM and ACCELIS merge to give birth to ACETIAM.

ACETIAM hires now more than 80 employees in nehs, including itself 5600 employees.

More than 500 sites around the world are equipped of ACETIAM Connect telemdicine solution. More than 10 millions images are exchanged each month through the telemedicine network.

ACETIAM has been able to put in place local, regional, national and international teleimaging centers.

En poursuivant votre navigation sur ce site, vous acceptez l'utilisation de cookies qui nous permettent de vous proposer une navigation optimale et des contenus adaptés à vos centres d'intérêt.
We use cookies to give you the best experience on our website. You can browse the site with ACETIAM disabled cookies ; However, your visit will be significantly improved if cookies will be active. If you continue without changing your settings, you agree to receive all cookies.

Any cookies that may not be particularly necessary for the website to function and is used specifically to collect user personal data via analytics, ads, other embedded contents are termed as non-necessary cookies. It is mandatory to procure user consent prior to running these cookies on your website.