You are here: Home / Resources / Case Study: The use of ETIAM Nexus at Cleveland Clinic, Ohio

Case Study: The use of ETIAM Viewer at Cleveland Clinic, Ohio

Cleveland clinic chose ETIAM in the framework of its workflows & medical data organization within its main campus, as well as nine hospitals and numerous outpatient facilities in the nearby city.

ETIAM Viewer & ETIAM Nexus solutions have been used and implemented there successfully.

ETIAM Nexus is a Web application used to manage outside exams. These exams are imported from CD/DVD through ETIAM Viewer or sent directly and securely from outside institutions using ETIAM-Connect and its Secure Medical Networking technology.

Today, most outside images—including these CDs, which are transformed into electronic images at the Desks, and exams sent electronically from other facilities directly to the Radiology Department—enter the PACS through an ETIAM Nexus device located in the central PACS Film Library.
ETIAM Nexus runs as a central appliance over the hospital intranet and all users are authenticated for security. The server automates many aspects of the exam reconciliation process, while specially trained technologists perform the most sophisticated changes, as the image enters the PACS.

ETIAM Nexus supports all the varied workflows required for images from the multiple sources involved and allows the fine-tuning of information that enables Cleveland Clinic to manage images their way—easily, cost-effectively and accurately.

At the Film Library, the ETIAM Nexus server efficiently processes all exams to ensure they are accepted by the PACS quickly and precisely.

How does it work? 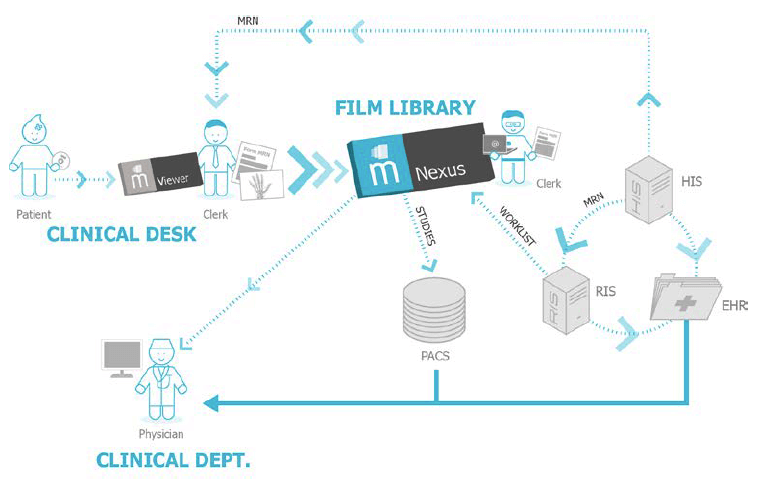 En poursuivant votre navigation sur ce site, vous acceptez l'utilisation de cookies qui nous permettent de vous proposer une navigation optimale et des contenus adaptés à vos centres d'intérêt.
We use cookies to give you the best experience on our website. You can browse the site with ACETIAM disabled cookies ; However, your visit will be significantly improved if cookies will be active. If you continue without changing your settings, you agree to receive all cookies.

Any cookies that may not be particularly necessary for the website to function and is used specifically to collect user personal data via analytics, ads, other embedded contents are termed as non-necessary cookies. It is mandatory to procure user consent prior to running these cookies on your website.